Ok well, its been a while.. but lets not worry about that; A wild LED suit appears!!

Well that wasn’t great, but I thought it would be a good time to give my first video blog a try 😀

I’ve since started working on a much more refined and modular Arduino code (which should make it easy to port to another micro when I get there 🙂 ), add alot more functions / color patterns. Also got the bluetooth working and some simple functions on an android app that I’ll be working on in the next few weeks. So keep an eye out perhaps then I’ll feel ready to release the source code xD

Next up will be improving the bottom design and coming up with some ideas for the top half! also need to tidy up the wiring and find a better battery source solution.. (in-between uni, yikes!)

Oh small side story; so we’re not big on personal safety here at Rambo labs, and this weekend at a club I smelt that wonderful burning silicon smell shortly followed by a burning sensation on the back of my leg.. 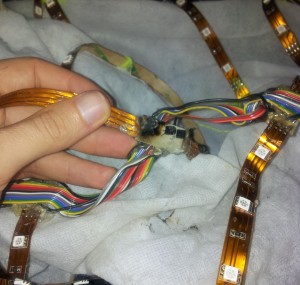 Yes, a transistor decided to explode. luckily I have a direct power toggle switch close at hand! nothing too serious just a minor burn xD managed to rip the transistor off and carry on with the party, and the LED pants that night!! 😀 Further investigation didn’t reveal the source of the short or whatever caused the fault, I’ll deff keep this in mind for future redesign thou. perhaps a poly-fuse or something…

Some pics from the party 😛 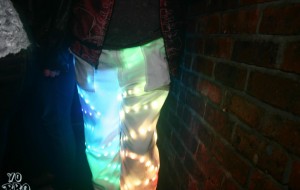 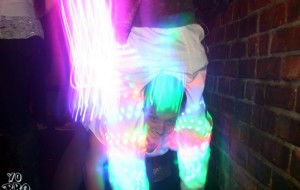 Another little vid demoing the modes with a mate (If you don’t like dirty words, don’t watch this one, I warned you 😛 )

Some older stuff from a while ago, still good thou!!

Really interested to see the source for the different light effects on the arduino.

Awesome! thanks for the support!
I’ll put my current code up if you’d like?, but its really not that great (all the sequences are hard coded in as if then loops :/) not that proud of it I’m afraid.. I’m busy working on a much more modular v2 code, have bluetooth control working all-ready 😀
What I really need is to come up with an efficient data structure to store/display the different patterns (and react to the music levels!)
Open to suggestions!

My code (using lpd8806 strip), I had pretty great success with using switch cases, and returns for alternating modes, though I bet the effect contents will vary with your strips.

Hey Rob
i love the led suit, what a great project. I really would love to rebuilt it.
just such a looooong time ago i use to study electronic engineer&IT.
i wondered if you can email me the thing needed for the project, kind of a building guide.
thanks a lot and keep it up (also the repro printer, just great)
cheers from switzerland
remi

I am also from switzerland like Rob and i am interessted
for this suit.

Is it possible, that you can give me the email from Rob?