The morning was yet to come, the air was cold, and the Scoobys were chomping at the bit. The roads were epic.
All in all my first SOCSA breakfast run was AWESOME, not something I’m going to forget for quite some time! cannot wait until the next one!! 😀
I’m not entirely sure where we started, what our route was or where we got to xD (I believe it was tableview.. ) but I just followed the leader and took the journey one corner at a time! 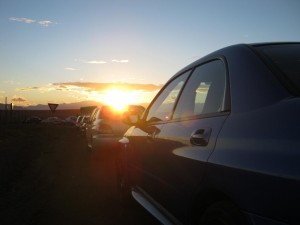 END_OF_DOCUMENT_TOKEN_TO_BE_REPLACED

Time has gone faster than usual, as usual. 😛 The first term of University is over for me, so we have a nice week long break before the beginning of the second term of the first semester. Assuming I passed all my tests this term I guess I’m 1/16th of the way towards my degree 😀
Moving on, I decided it would be to expensive and a bit pointless really to travel all the way back home for the vac-week, yet most of everyone I have met here have gone to their respective homes for the holiday… I guess that just gives me some nice down time to catch up on my urge’s to MAKE something! 😀
I do however have a few activity’s planned; next weekend I should be attending the Subaru Owners Club Dyno Day to hav a play with some other Scoobys and meet some new people 😀 Also, last night I attended the open evening at the SAAO – (South African Astronomical Observatory?) which was AWESOME, Definitely going there again, first time I have actually seen the rings of Saturn through a telescope. 😀 😀

This last week I received 3 MSP430 Launchpads from Texas Instruments! 😀

Since I haven’t yet given in (although I think the time is fast approaching…) and bought some Arduinos, these are going to be the first dev boards I’v played with and I have some interesting little ideas for projects so keep checking back. 😉

In other news my flat mate and I went out today and bought a microwave! 😀 you dont realize how important such item is until you dont have one for 2 months 😛 Now we just need to get ADSL!!! which has turned out to be a mission as usual… hopefully they are coming to install soon, because 3G just doesn’t have enough cap to get me through the month!!! 🙁

Wow, its been a while since I’ve updated me blog… There has however been good reason, I now live in a new city!
The past two months have been a whirlwind adventure moving etc, but the bottom line is I now reside in Cape Town 😀 about 1700km from home.
Once more I’m studying, this time Electrical Engineering! I have been very lucky to be accepted at currently the best university in Africa! 😀 I expect the next two years are going to be very busy for me so projects are going to have to take the back seat at times.. Hopefully I will still find some time to keep blog updates going 🙂